Let’s Get Real About Concept Art 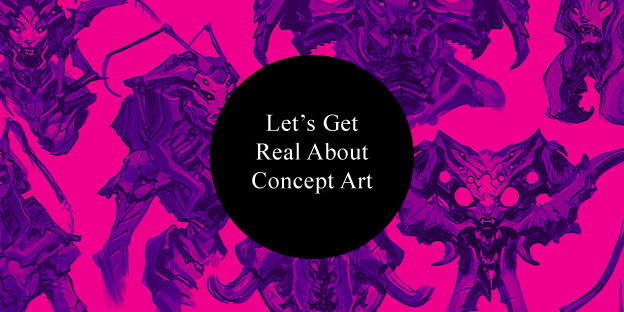 The public perception of what concept art means is severely skewed.

While I have to accept that people broadly label art created for games and films concept art, including promotional illustrations, it is necessary to get real about what concept art as a craft actually is.

My students and other young artist I talk to get presented with misleading standards for concept art, which feeds into insecurities and doubts. And that puts unnecessary roadblocks in their ways. It also suggest to the broader public that these misleading standards are what concept art is about, which leads to my students receiving completely skewed feedback for the work they publish. They get devalued and berated for doing EXACTLY what is bread and butter to professional concept artists.

If you are a newcomer artists or a student trying to get into concept art, you should read this article. It might clear up some things.

Nobody wants a design go viral, which is possibly later rejected and have customers imprint on a wrong key visual.

Publishers and studios want to hype their release. Magazines and blogs want to generate views from the hype around the game. In order to fulfil these goals the art needs to represent the final key visuals of the game accurately, which means the art is either selected or created after the designs of the game have already been completely established and approved.

Companies only release concept art when it is polished and final enough to represent the actual product. What gets released as concept art is actually promo art. Nowadays all promo art – even including obvious art that has been created after the completion of the production of a game – gets labeled concept art by the marketers who release it, the editors who write about it, the fans who share it, the sites which collect it and even the people who made it. 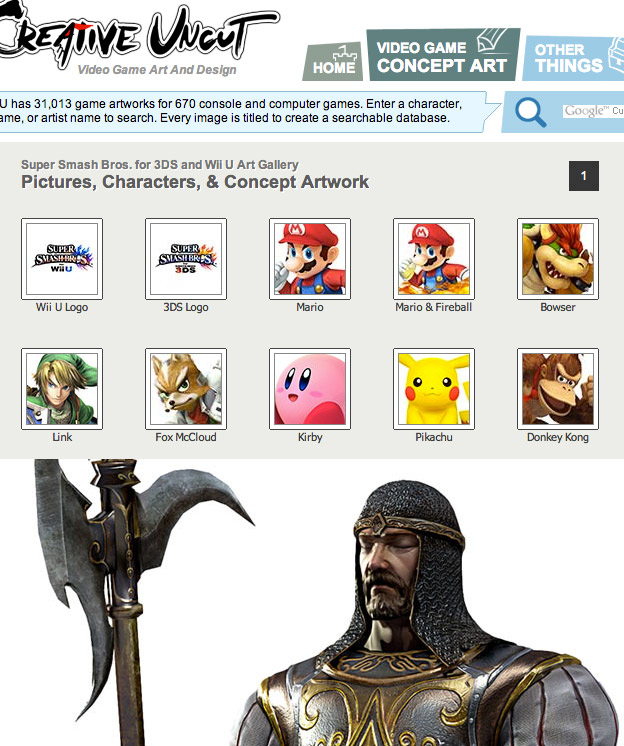 Sites like www.creativeuncut.com do a great job at collecting game related art. However, if you click the “concept art” tab, you’ll find that the majority of images is promo art. Not even repurposed concept art as promo art, but straight up promotional illustrations and 3D renders. Something is off here.

This sucks hard. So much talent blocked by unrealistic expectations and held down by gatekeepers who enjoy pretending to be the arbiters of what real concept art is. Let’s change this.

My problem lies with all the stuff, that is totally not concept art, still getting treated as concept art and all the stuff that totally IS proper concept art but gets either omitted or gets dismissed as something inferior.

My problem is, that I have to clean up toxic misconceptions about concept art, over and over again, in my classes and in personal conversation after personal conversation. I say toxic, because I regularly meet students who look at what the community tells them concept art is and who compare their own work to that twisted ideal and then conclude, that they do not have what it takes.

We need to understand, that what is sold as concept art publicly rarely is representative of what concept artist actually have to do and how they do it. Concept art is not what you create and publish to hype already established visuals. Concept art is all the dirty work you have to do in order to establish the visuals to begin with. 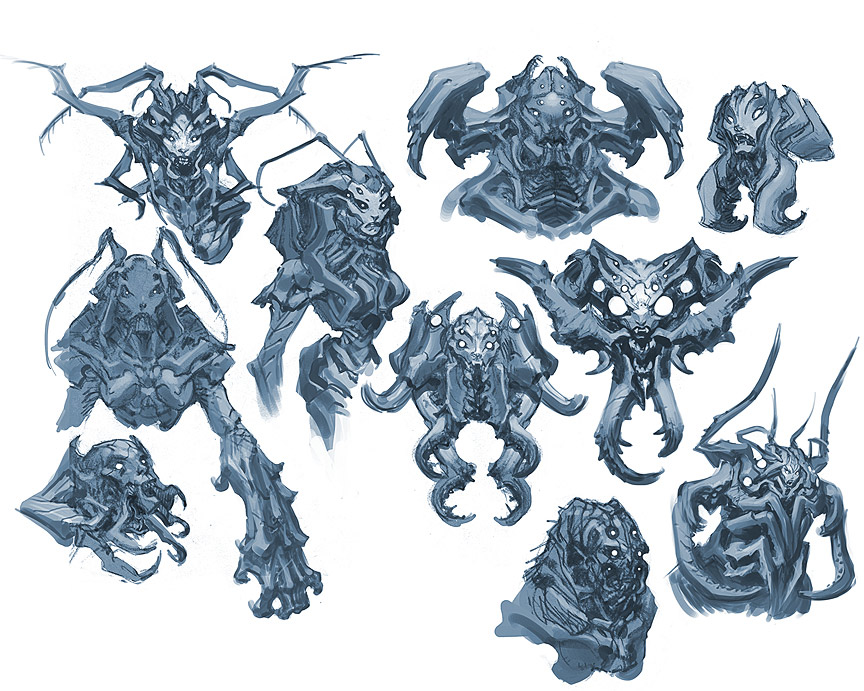 All of these boss design sketches for Darksiders went into the drawer. They are made quickly with a focus on volume and not execution. Drawing variations, but only one of them gets picked and the rest discarded… this is concept art. By Paul Richards. You can also read a quick response to this very article by Paul here. 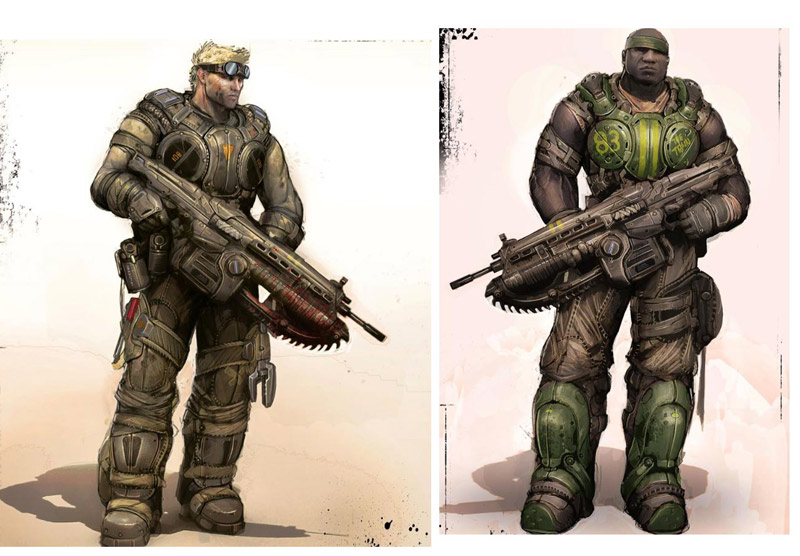 If you google concept art for Gears of War 3, you find this. Looking into the art book from Ballistic Publishing reveals, that these character concepts are done by overpainting basic blockout 3D models and are not painted from scratch. Via Epic Games. EDIT: rewrote this caption to make clear that this art was used during production, after this comment came in: read comment

In The Trenches... Wikipedia says: Concept art is a form of illustration where the main goal is to convey a visual representation of a design, idea, and/or mood for use in films, video games, animation, or comic books before it is put into the final product. Cute. What a wonderful fantasy land in which masterful concept artists come up with ideas and designs, paint them and then these designs go into production. Bam! Just like that.

While the wikipedia definition is not technically wrong, it ignores the bulk of concept work that disappears into drawers. Only a fraction of what concept artists paint actually later gets used as reference material for the production.

For every final model sheet there is tons and tons of exploration art, mock-ups, reference collections, thumbnail sketches, speed paints, variations, iterations and rejected designs. No matter how masterful a concept artist is, he or she will usually create more waste paper basket work, than designs which actually get put into the final product. 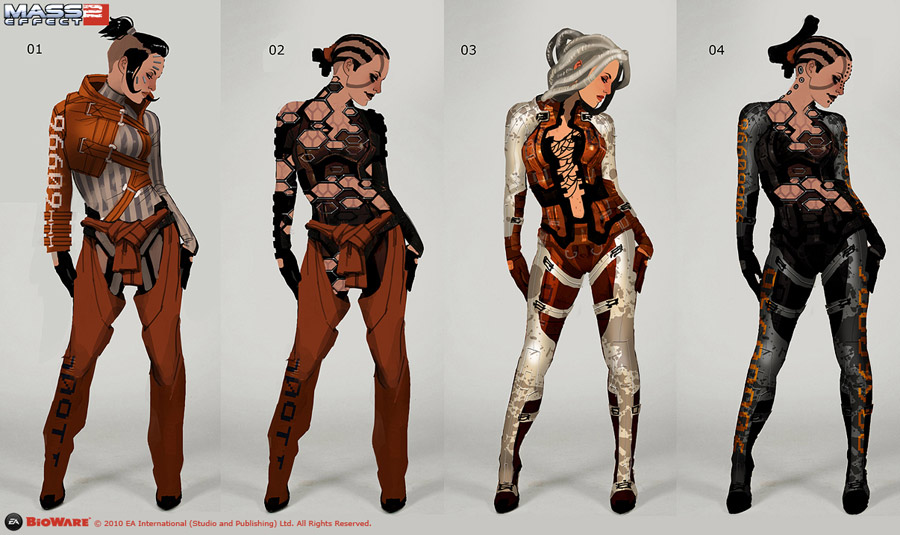 Character exploration for Jack from the Mass Effect series. All costume designs are drawn with simple lines, flat coloring and roughly copypasted textures. Also all designs a drawn over the same silhouette, so that elements from individual designs can be recombined into new costumes. By Matt Rhodes 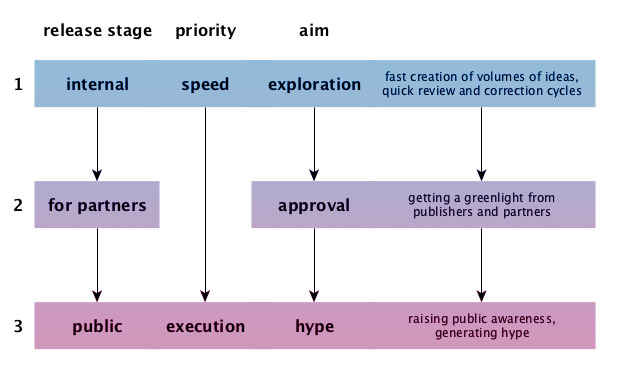 1. As long as we are creating designs for internal purposes – within the creative team – speed is more important than execution. Building a universe is a huge undertaking and incorporating the vision of everybody involved means producing huge volumes of designs – HUGE volumes – so that everybody can look at the same stuff, discuss it and eliminate ideas until only the strongest designs remain. It’s like mining – you have to eliminate rubble to get to the gold nuggets. This is the phase in which the most ideas get sorted out, so fleshing out an idea better not take too much time.

Before a design gets to stage 2, these people need to have their say in it:

2. Only when we start presenting our selected ideas to our partners – in pitch presentations or milestones or submit it directly to our partners – only then do we need to take care about execution, because now we have people to convince. However, time and budget restrictions often make it a bad move to invest a whole lot of working hours into polishing your ideas and art, only to have the partners maybe smack it all down with their demands. This second stage is a balancing act between speed and execution.

These people need to be consulted and satisfied before a design can go into stage 3:

3. Finally, some of the concept art gets approved for public release. It’s a marketing effort and only the most representative and good looking concepts get out, often getting another round of painting polish (like photoshopping a photograph). Sometimes art gets made after the designs are settled but are given the appearance of concept art to fit with common narratives about the creative process of making games – yes, fake concept art. For public releases execution is key. You want to flash your audience and get people hyped, this stuff needs to look tight.

Stage 3 art is what the broader public gets to see (including illustrations that really really have nothing to do with concept art). Stage 1 and 2 only find their way into artist’s portfolios and art books long after the game has been released, if they get public at all.

The public idea of concept art is skewed.

Concept art galleries, concept art leaks and press releases include polished promotional illustrations, 3D renders, reworked former concept art and fake concept art. The bulk of concept work done to actually come up with designs often gets omitted or only published after the game launched, in order to avoid promoting unrepresentative key visuals and to sell audiences an attractive narrative about super-artists working on the next big thing.

This presents an unrealistically high default standard for what concept art actually is. 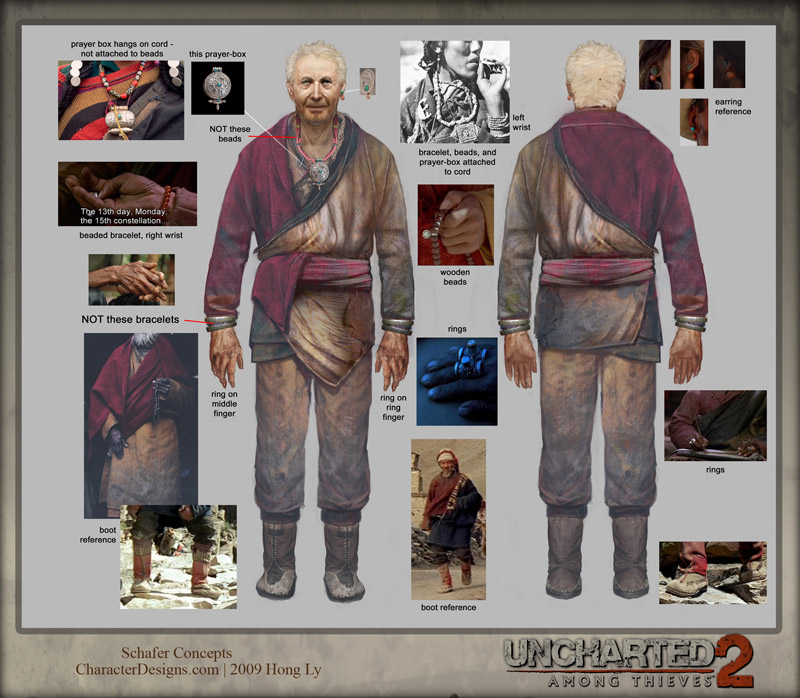 A lot of stock photographs were used for this character sheet for Uncharted 2. The artist not only copypasted snippets from photos next to the model to illustrate textures, details and materials. Close examination reveals, that the artist directly copied parts from the photographs into the character painting, instead of painting them himself. Also note all the mirroring going on here to save time. By Hong Ly

Time is money. In certain production phases, artists need to be quick rather than detailed in their work. They need to convey ideas and moods effectively with as little time spent as possible. Many of the ideas they flesh out will end up in the drawer anyway, so getting them done quickly is key. This means speed painting, overpaints of 3D models, overpaints of photographs, montage of photo elements, pencil sketches, line work instead of painting, use of stock photographs, reference guides with images from other games, thumbnail sketches, symmetrical painting, reuse of old paintings.

Because of the skewed public perception of concept art, all those valid methods to speed up processes are often called out as cheating, not real art, lazy, shortcuts, unoriginal, cheap, stealing and other undeserved labels from people, who value execution over professional requirements. These remarks are unqualified and should not be confused with legit criticism. 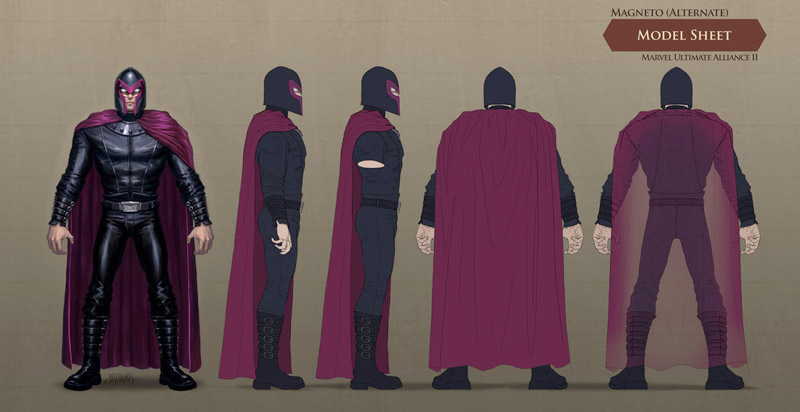 This Magneto concept for Ultimate Alliance 2 consist of a lot of mirrored elements. Only the frontal view is rendered, since painting the textures and shading for the other views too would have been expensive and redundant. By Eric Deschamps

This public idea of these painting gods who just whip out their stylus and then magically create whole universes from nothing but their imagination is misleading. They use references, they need other people to give them creative input, they throw away unused art, they need to get reviewed and corrected, they need to take short cuts.

Even though wunderkinds get the most hype, they should not be idolised and regarded as industry standard. If you find an artist online letting you in on their methods, not being shy about showing the tricks they use, give them a hug. 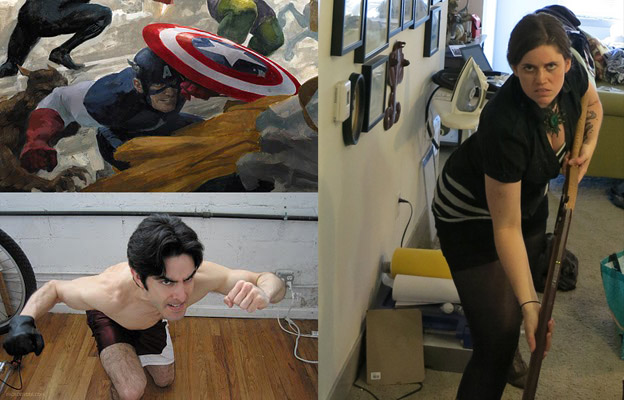 If you are a learning or aspiring concept artists, please know that it is not a crutch to use photo references or to overpaint a 3D rendering. It is not lacking skill to use line work instead of painting your designs or to grab an AK-47 from a licensed library instead of drawing it yourself. All those methods are smart thinking in many many professional situations, which makes you a more productive and valuable concept artists.

You need to be smart about the tasks ahead and honest with your methods. Illustration is illustration, concept art is concept art. Make sure to not confuse the two, just because games culture somehow missed out on giving them distinct labels.

Back to work. Cheers.

66 Replies to “Let’s Get Real About Concept Art”