The Politics Of Girls Drawing Manga 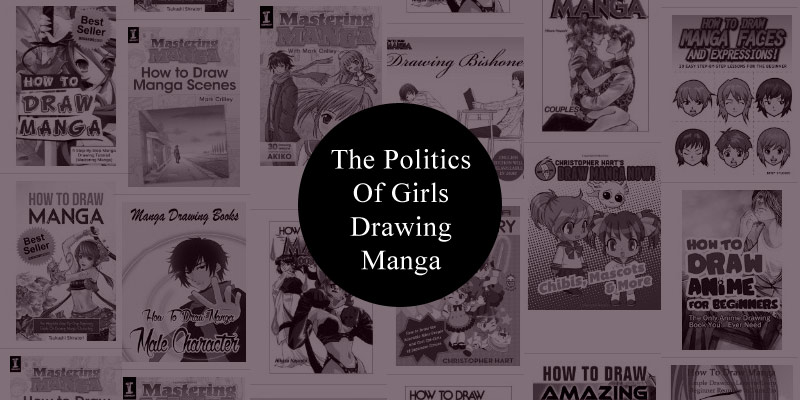 As someone who works as a designer and teacher I got around to have many many people show me their portfolios and ask for advice about how to improve their skills and works in hopes to better snatch a place at a design school or to be more attractive for potential employers.

Very often when I have that kind of talk with girls and young women, the conversation is difficult, because what they show as their current portfolio is heavily influenced by manga, anime and manhwa.

I say it’s difficult because I respect what these women and girls do and I appreciate it, but at the same time I know that they are going to have a really hard time getting respected in the industry and academia space.

Sure, there is an easy argument to be made that you wont find much opportunity to work as a manga artist in the west, because the demand is not that high. …at least compared to the demand for concept painting, 3D modelling, western animation art and cartooning. So, I think it’s the responsible thing to tell theses young aspiring artists that their focus on manga style artwork is putting them into a niche and to recommend to them that they have better chances to find work if they present themselves as more versatile.

But you can do that without treating them like inferior artists. Unfortunately the tone with which manga-inspired young artist get confronted often is massively disrespectful. The sentiment is a weird cluster of ideas, that boil down to “You got talent but your infatuation with asian aesthetics ruins your chances of becoming a good artists”.

These young artist are often ghettoized and only accepting western aesthetics and approaches will make the gatekeepers give them any credit for what they do. Communities do that, popular artists do that, recruiters, and even art teachers… which for me – being an art teacher myself – is INFURIATING!!!

While my rant here focusses a lot on that problem in realms of comic art, it applies just as well to games, since this is where I meet most of the young female manga-style artists I mention here. Even though a huge chunk of popular gaming culture is japan-centric, being a manga-centric artist is still treated as an inferior approach.

When I say “discouraged” I usually don’t mean the artists in question are no longer willing to go pro. But they are visibly uncomfortable with what they usually enjoy drawing, they are preemptively defensive about their work, expecting to get some sort of harsch comment. They also feel kind of lost, since the one approach to art they had was shot down and now they look for advice to fill that void.

Why have a gag reflex against Manga and Anime?

The established comic culture (meaning US superhero comics and franco-belgian stuff) was kinda baffled about how successful these books became in the late 90s early 2000s and they quickly had to give room to the proudly self-proclaimed “otakus” in their spaces… meaning store shelves, publisher portfolios and conventions.

The territorial reactions to Anime and Manga in the comic community where not only culturally ignorant but also deeply misogynistic.

People to blame for the unwarranted popularity of this inferior art form were quickly identified: young women and girls. Because this is the new audience that Manga culture brought in. Female Manga fans. They bought the books, they attended the cons, they did the cosplay and they aspired to become comic artists themselves…something US and Franco-Belgian comics never even remotely achieved in this scale.

Manga and Anime was that weird stuff girls for some reason liked, even though it’s about boys kissing and romance and badly drawn, so those girls probably don’t know what a good comic looks like.

…and now imagine being a girl trying to get recognition for drawing Manga style herself.

As one anecdote: There is an art teacher (!) and award winning german comic artist who publicly states in an interview that the current generation of male artists does the more interesting stuff compared to female artists, because the girls have not been interested in comics for boys and now are wearing figurative blinds because they come from the manga corner. Source, german:(x)

…imagine having this person as your “authority” on art in class?

The Anime and Manga centric DIY culture is one of the major entry points for young women and girls to get into drawing and painting.

And I also believe this principle should apply to every fucking internet commenter, person asked for advice and any publisher of educational content.

One day we will be old and our understanding about what makes great art will be retro if we are lucky, and obsolete if we are not… but we wont be the “authority” on design forever and that is for the best. So let’s stop pretending we are the alpha and the omega today. We are not. Instead of taking whatever foundation a young artists brings to the table away from under their feet, rather build upon what they have.

I know that boys like Manga and Anime too. A lot actually. But male-centric Anime and Manga have never been remotely treated as alien and problematic as the female-centric ones.

Thankfully, digital concept art as thing grew and provides another big access point for female artists. Those who come from Anime and Manga still have to put up with the same gender-discrimination bullshit like 15 years ago.

I understand that I probably skipped some nuances about what constitutes Manga and Anime and Manhwa. Correct me in the comments. :)

4 Replies to “The Politics Of Girls Drawing Manga”