It is recommended, that you have read the introduction to the Orwellian images genre.

How Arkham City came to be…

Arkham City – the titular location of the 2011 third-person action-adventure by Rocksteady Studios – is a human rights violation from start to finish. It’s somewhere between a stalag and a ghetto, where unwanted people are just dumped without resources or help and are then also put under constant surveillance, mental conditioning and threat of violence. It’s a dystopian super prison.

This huge facility is the brain child of psychotherapist Professor Hugo Strange – longterm member of the Batman rogues gallery – who managed to get the city council and other politicians to vote for it. This was managed by convincing the public, that this facility was needed, by dehumanizing the future inmates and using the press to twist facts into Strange’s favor. 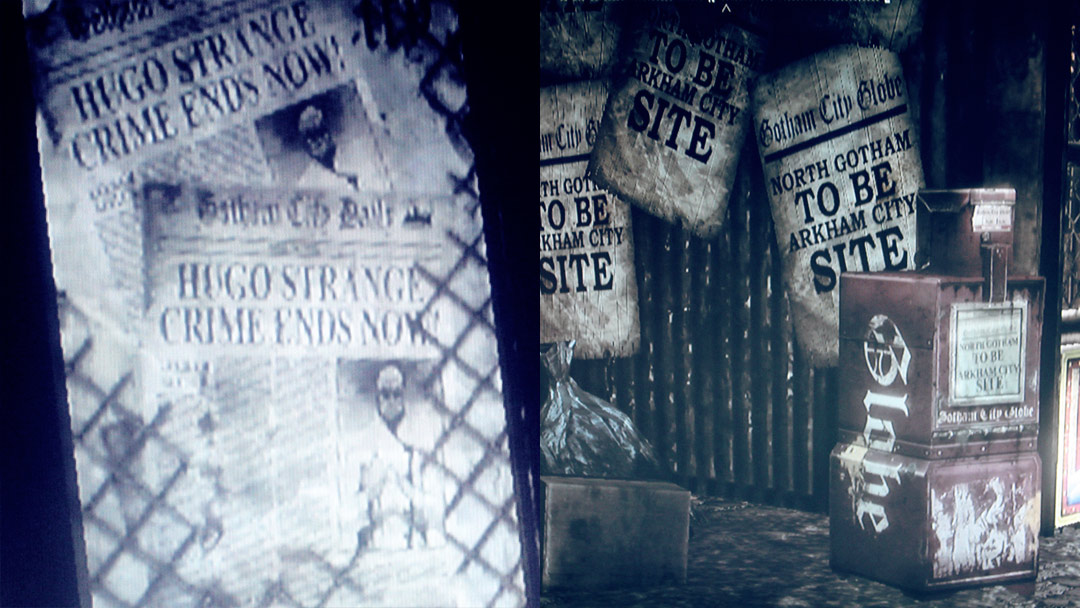 Then a part of Gotham City needed to be cleared out to make room for that facility. Government sanctioned lies about emergencies and quarantines, as well as forced removal of tenants from their homes was employed. After that, public 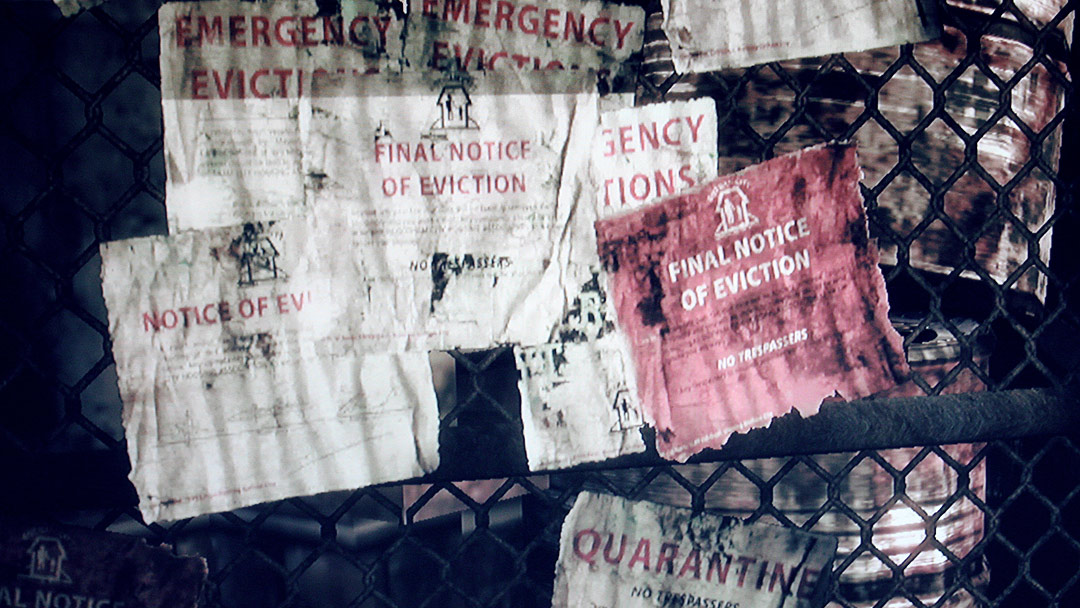 A private security contractor named “Tyger” then repurposed public spaces and areas into a high security prison facility, including surveillance systems, lock downs, threatening signage and a huge Berlin-Wall-style border around the complex, including armed guards with Schießbefehl. 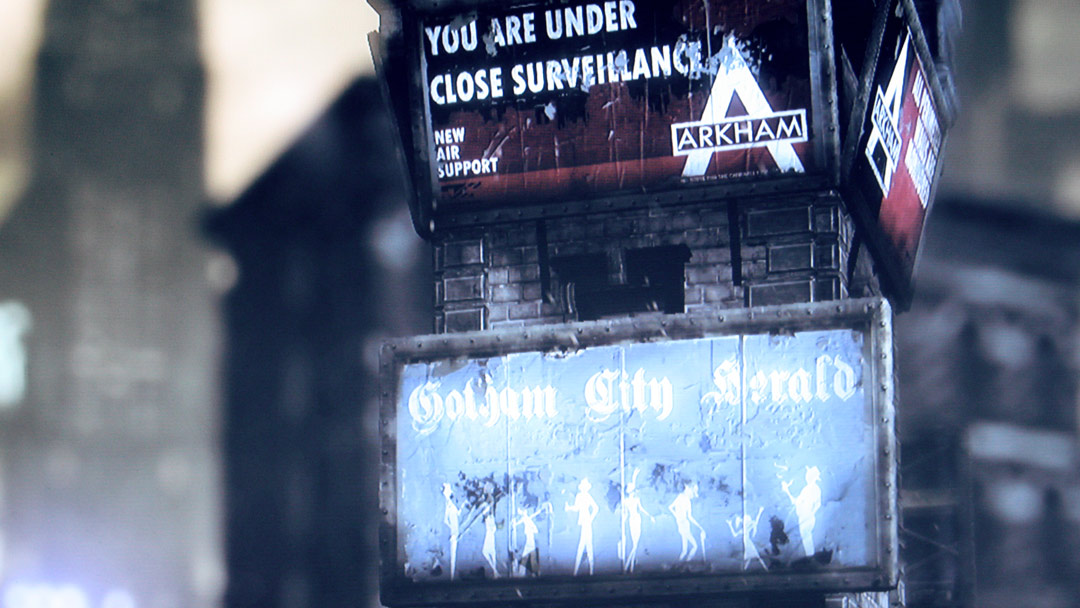 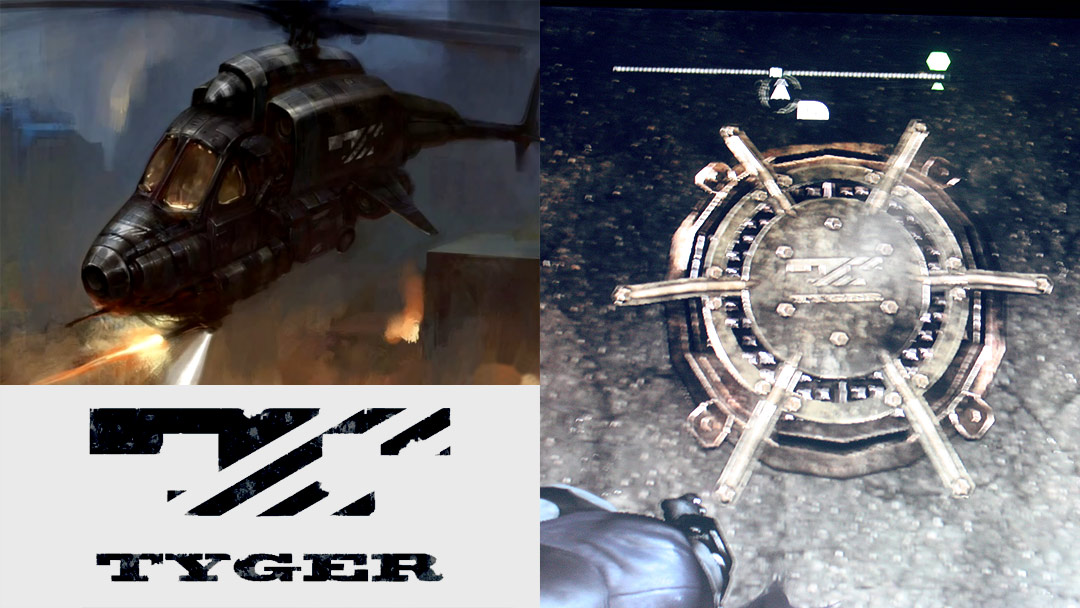 Once everything was ready – without care or due process – every inmate of the local biggest prison Blackgate and the local biggest mental health facility Arkham Asylum where just dumped into that area to fend for themselves. And so where political prisoners or people who became inconvenient for Strange, such as snooping reporters. 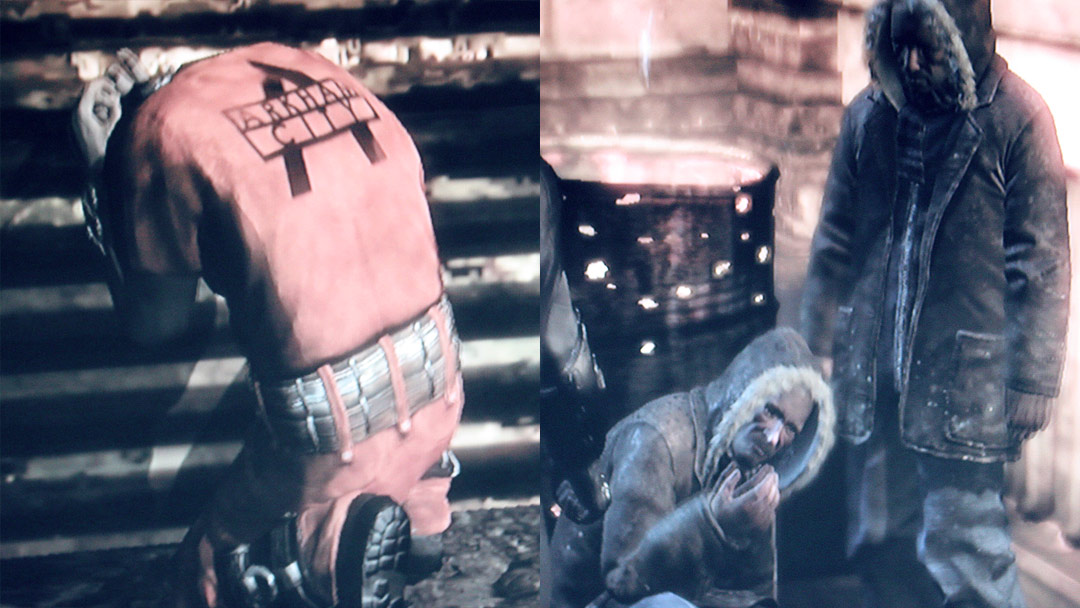 Many of the details I wrote up here are told through assets in the environment alone, while other more explicit story moments are at least reflected in the minute details found in the playable areas of Arkham City.

The displayed themes of oppressive governments, manipulative media, corrupt politians and ghettoized citizens are prevalent in Orwellian fiction. The artists at Rocksteady recognized the potential for Orwellian imagery within those themes and went full steam ahead, using the movie adaptations of Orwell’s famous dystopian sci-fi novel “1984” as a direct reference point.

Big Brother is watching you! 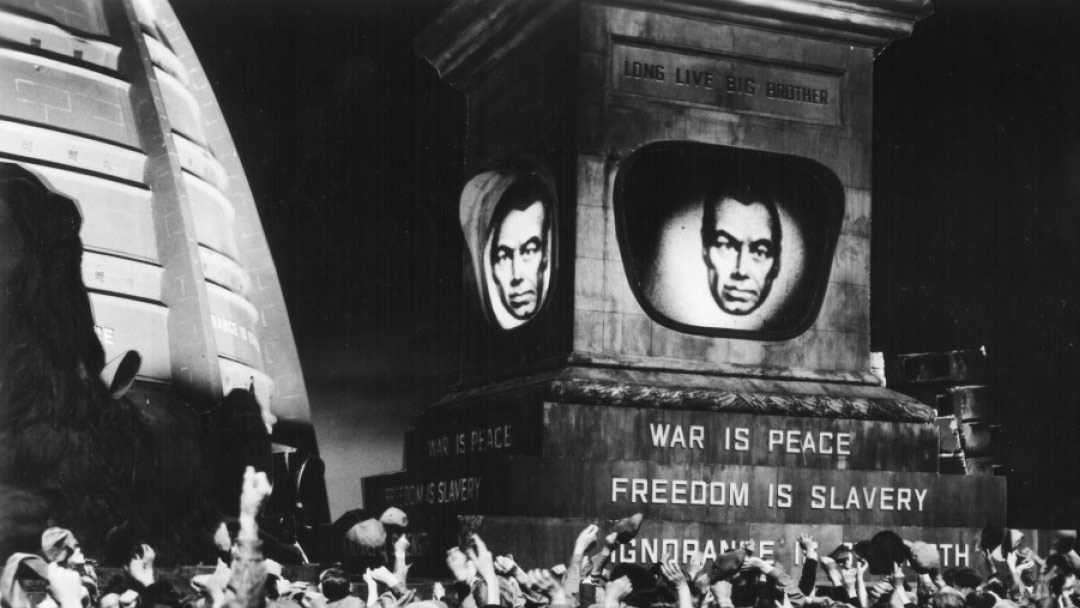 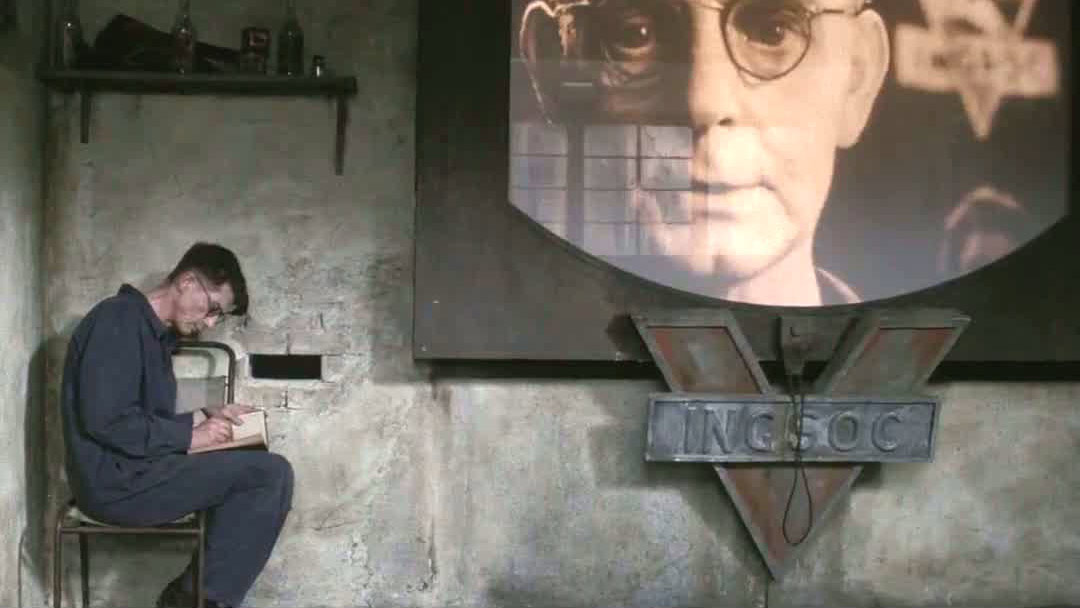 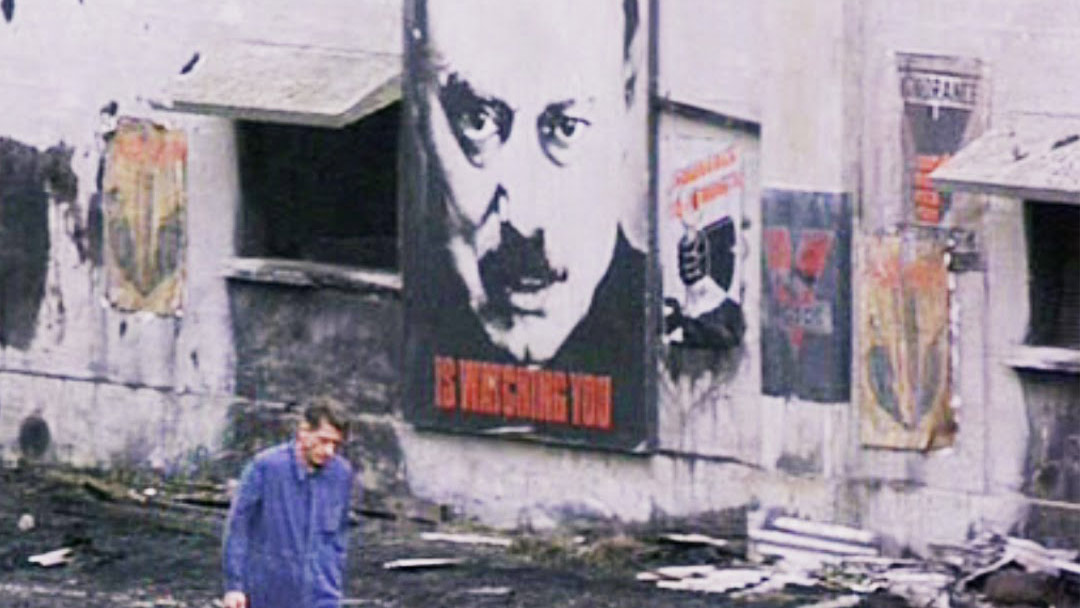 In Arkham City, many visual themes of the movie adaptations are directly quoted. The movie features a prison-esk ghetto-like aesthetic with abandoned buildings, empyt rooms, naked walls and people in overalls scraping by… so does the game. Where the references to the films become more direct, is where Tyger/Arkham City communicates with their inmates.
Like in the films, plakatstil posters are used to keep the inmates in check. Note the similarities in the red-white-black color scheme and the constant visual and verbal reminders, that Tyger is always watching you – like big brother in the novel. 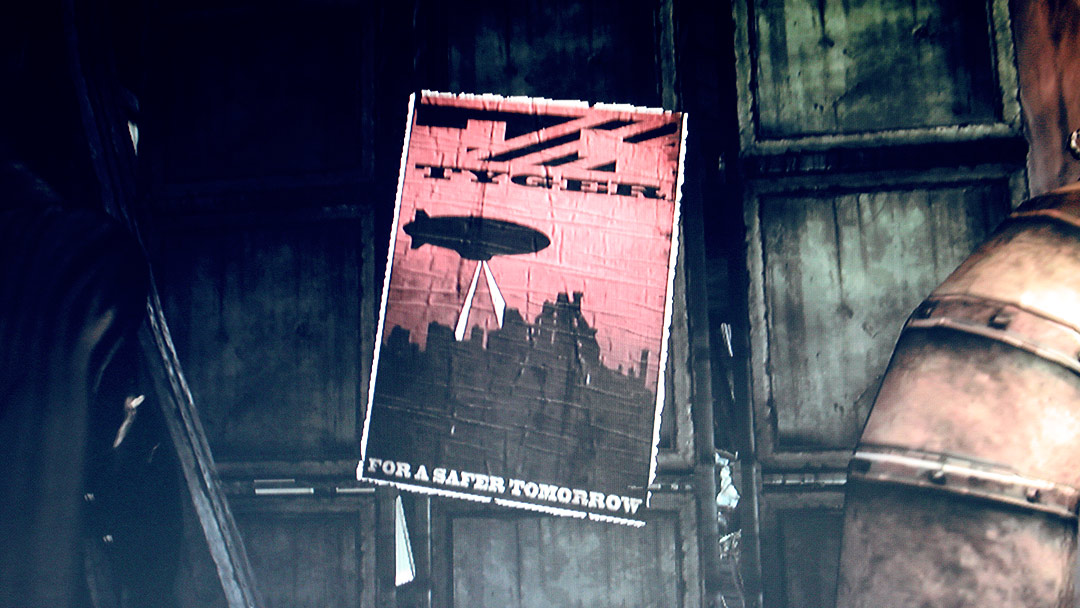 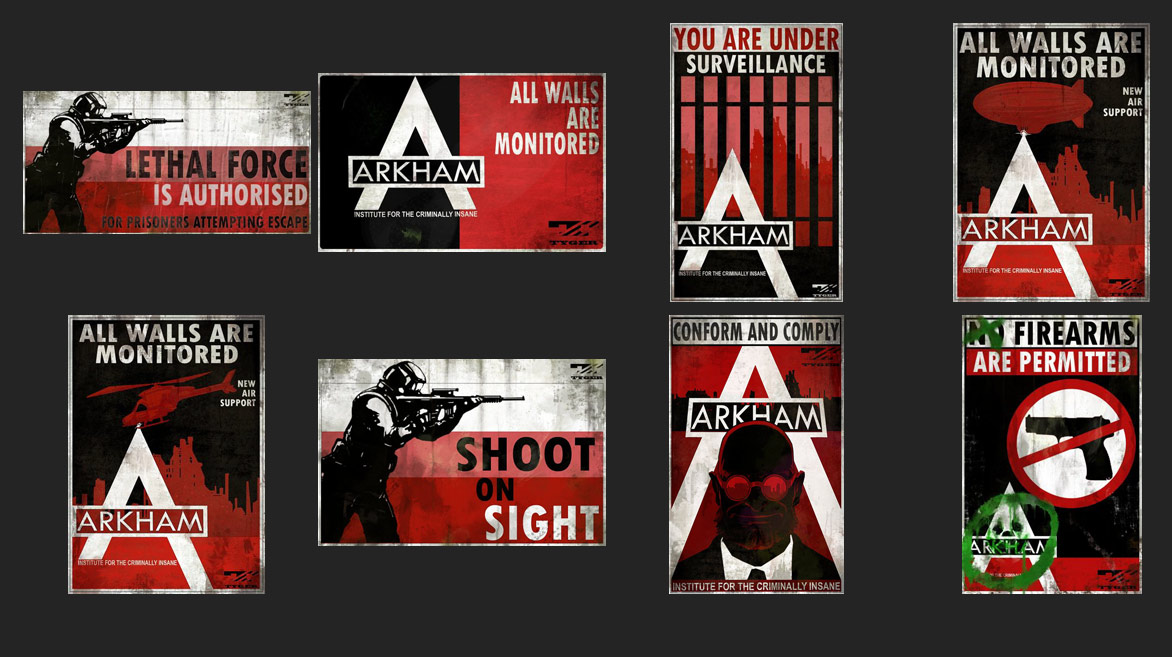 The quotes become even less subtle, when we look at specific pieces in detail. Such as this portrait of Hugo Strange as the watching Big Brother, symbolized by the skyline of Gotham reflecting in his glasses. 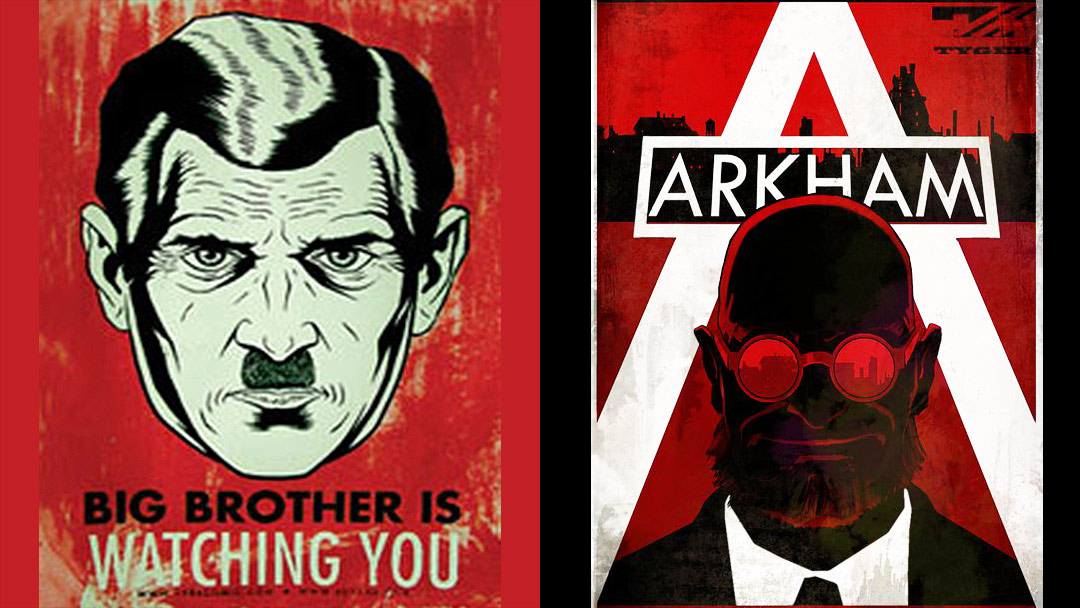 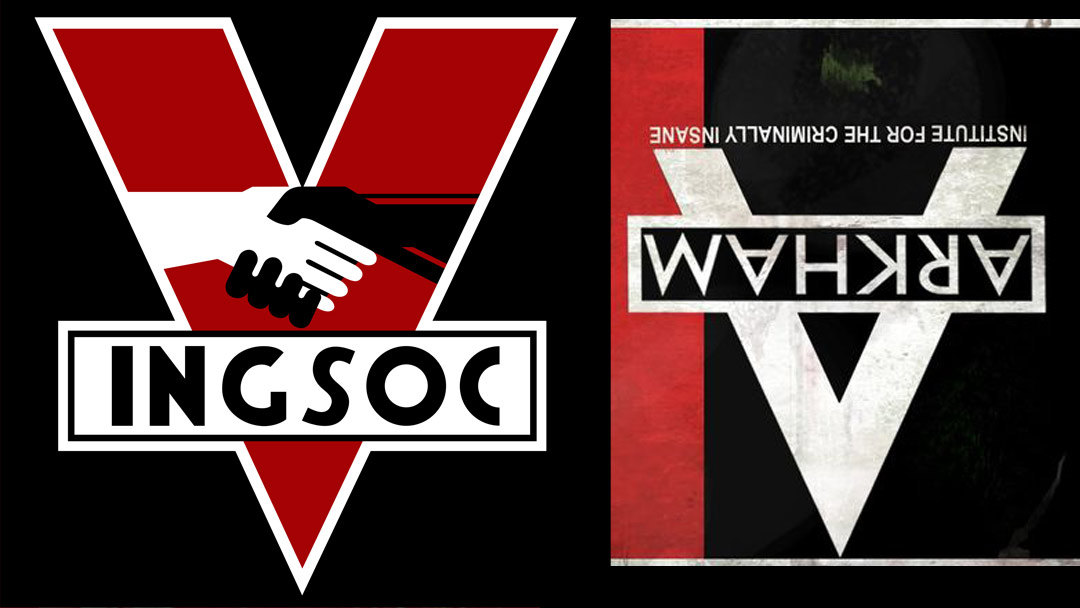 The connection of the Ingsoc logo and the upside-down Arkham version of the same icon becomes even more obvious when looking at the metal versions of both logos prominent in both works.

In many works of art framing their stories in an Orwellian context, the heroes are usually those who oppose the system. Those who find individuality under the pressure to conform, often expressed by acts of vandalism against the government-issued propaganda media and channels. Weirdly enough, in Arkham City, it’s the rogues and their gangs.

Due to the unsupervised nature of the facility – with inmates having to survive on their own – gang building is prevalent. You join a gang or you die and these gangs circle around their bosses, represented by popular Batman villains, such as Joker, Two-Face, Penguin. Arkham City is plastered in oppressive signage, restyled in the iconic imagery of the boss villains as markings for gang territory.

But of course, the Caped Crusader joins in on the action, hunting for guards, surveillance systems, cameras, taking out security systems. Employing vandalism of his own, as an expression of opposition, carefully webbed into the gameplay. 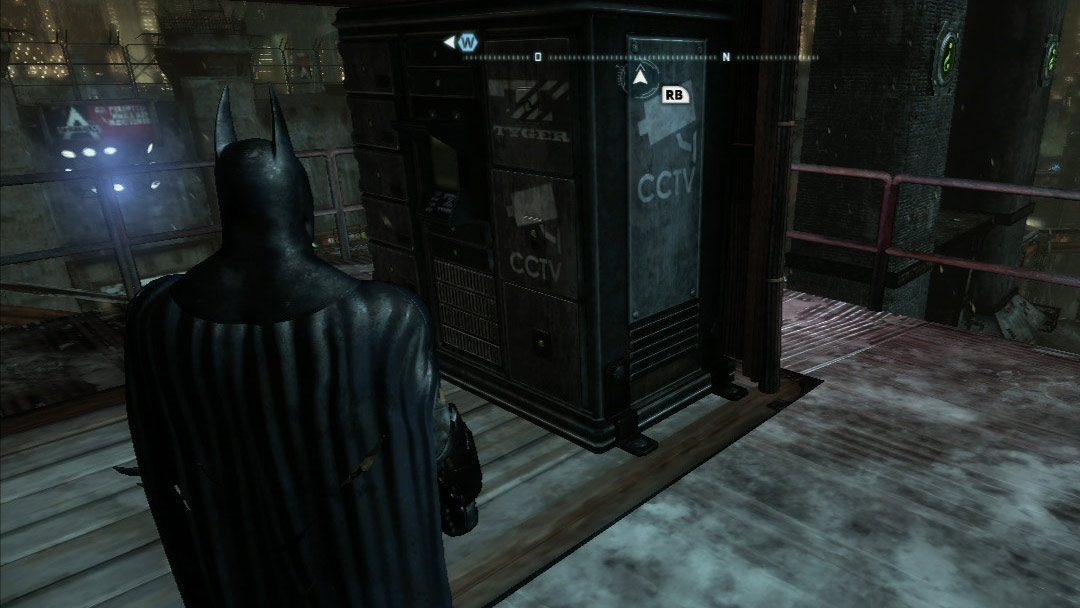 Making Arkham City an Orwellian nightmare is the only sensible thing to do with such a narrative setup, but here execution is what makes Rocksteady shine. Not only are the game assets crafted to evoke 1984 on all of Arkham’s walls, the gameplay benefits from a clearly identifiable oppressive enemy faction, that spreads their violence, not only through the use of armed forces, but surveillance and psychological manipulation. 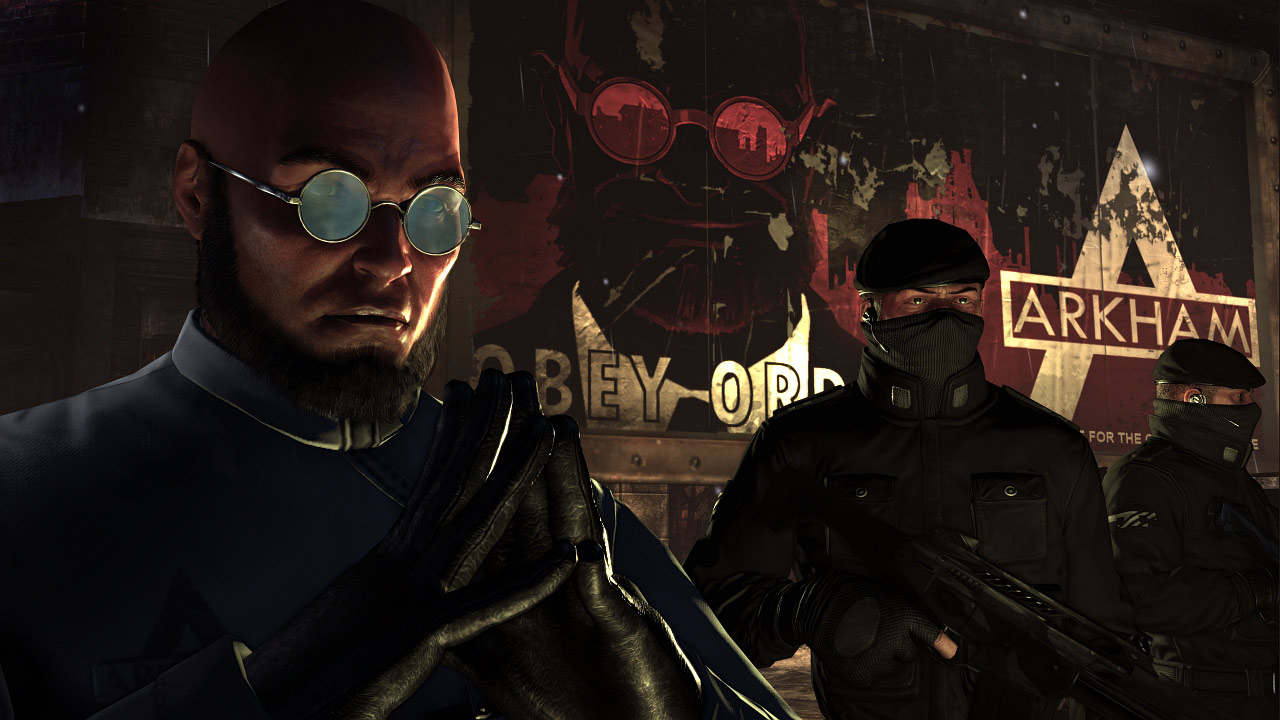 The provided samples only represent a small fraction of the instances of Orwellian themes in Arkham City and there is much more to discuss in regards to environment design, themes and art direction. Check out the related posts below or the related task at the top of the page to learn more.