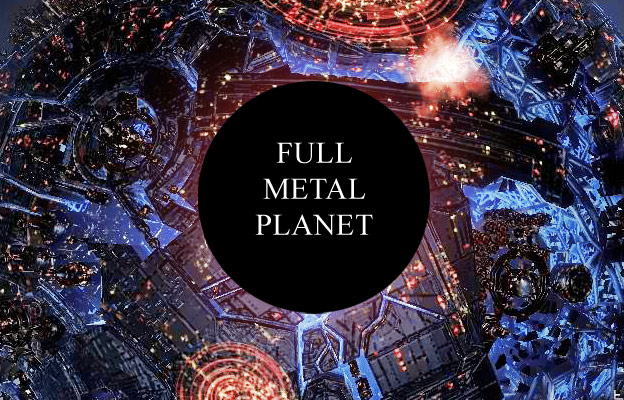 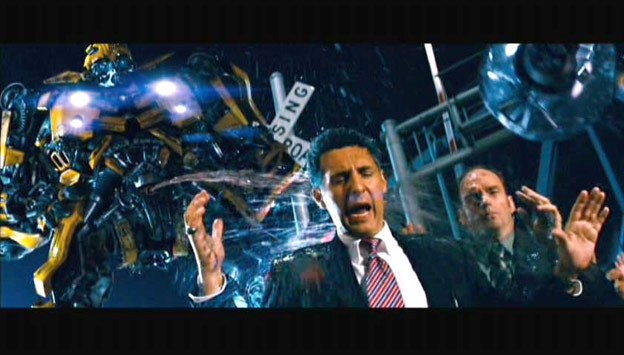 You didn’t think I would write something about Transformers and not take a jab at Bay for pissing on humans, did you?

Transformers never have been very high-brow – more style than substance, riding good-vs-evil tropes to sell toys to kids – and on the surface the two games in question here don’t really change that track record. So, let’s look below the surface. I’d like to argue that High Moon’s Cybertron games smartly emplos typical popculture story traits to then subvert them and by doing so end up becoming a morality play about the senselessness of war.

The big thing about these two Transformers games is that they don’t take place on earth. And this is key to what makes the plot of the games so interesting. In most incarnations we start observing the events after the Autobots (good guys) and the Decepticons (bad guys) crash landed on earth. The Autobots join forces with the humans to defeat the evil Decepticons who are basically hostile invaders of earth. This alien invasion framing with Autobots as the nice helpful aliens clearly establishes a good-vs-evil dichotomy. Decepticons want to harms us – we the humans of earth – and the Autobots want to help us.

Without the earth and its inhabitants at play, things are much more fuzzier.

So, who is responsible for the war on Cybertron?

The war on Cybertron is a civil war. It’s a war based on political differences amongst brothers which escalated into violent faction based conflict. Some audio logs trace the beginnings of war back to Megatron – the leader of the Decepticons – getting rejected by the high council – a political committee deciding on who leads the cybertronians.

The position of Prime is not the position of a king. You want to become Prime because you think you have what it takes to lead your people to prosperity. Megatron behaves like a cartoon villain, has a short fuse and suffers from delusion of grandeur, but he constantly reminds us that he wants to be what he thinks is a good leader. The high council did not allow Megatron to become a leader through the official procedures, so he formed the Decepticons and basically started an armed uprising.

What the differences in political views between the high council and Megatron were is never explained. The audio log is all we get to explain aeons of conflict. Something about the status quo back then was so intolerable that Megatron started a war … and the funny thing is, the Decepticons are his followers. They aren’t drafted or cloned, they follow him. Audio logs have Decepticons speak of Megatron’s actions as revolution ending the cybertronian oppression and they are thankful that they are free now.

Autobots and Decepticons both think they need to win this war to survive and both factions see their opponents as evil aggressors and oppressors. Thankfully, High Moon Studios did not decide to make a statement about which faction is actually right here.

High Moon makes you play as Autobots and as Decepticons – Genius!

Both factions think they have to win this war to save their planet and the way the campaigns in both games are structured really helps you to get that. As trivial as it sounds, but forcing the player to switch between Autobots and Decepticons, forcing the player to experience the unfolding events from both perspectives, makes it really hard to just look at one faction as the enemy.

Whatever successful attack we managed to perform in one mission, we will be on the receiving end of that attack in the next mission. The player always has to deal with the fallout of his own previous actions. It’s a very impactful decision that somewhat challenges the player to empathize with members of both groups. 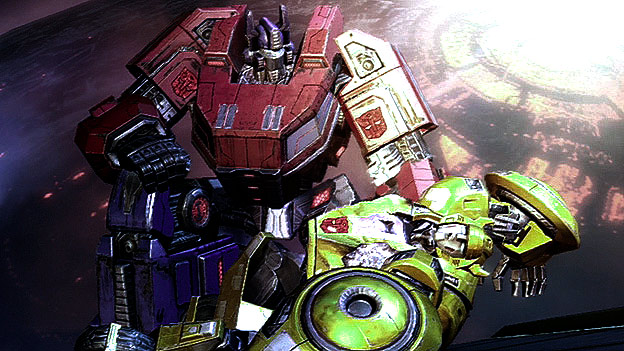 Fall of Cybertron: Bumblebee – the character usually designated to be the most likeable and relatable bot for audiences – goes down in the crossfire of the very first mission. A fitting symbol for all that will be lost in the escalating conflict ahead.

There is no moral high ground on Cybertron.

The studio did put the player into both perspectives and left the causes of war basically unexplained. The only thing left is conduct in war times and maybe the question of who wins.

Let’s talk about conduct. Sure, Megatron has a very evil and aggressive demeanor. He is a violent robot person, growing up as a gladiator (another hint at a oppressive pre-war society). His actions and behavior are very confrontational and he has little regard for life. He is the one in War for Cybertron who escalated the conflict to planet-killing proportions by tapping into the so called “dark energon”.

He did this to gain enough power over Cybertron to force the other side into capitulation. Megatron frequently offers his enemies to join him – or serve him as he phrases it. This happens sometimes pre fight, so bloodshed could be avoided and sometimes after he beat his enemies as an act of mercy. I’m not saying serving Megatron would be a good thing – I don’t know what his goals are and why the Decepticons are following him – but Megatron at least gives his opponents the chance to stay alive.

Optimus Prime? Not so much. He just kills, while shouting contextless pathos like “We will never sacrifice freedom!”. The leader of the supposed good guys never ever asks his opponents to drop their weapons or to change their ways. Megatron and Optimus both see no value in diplomacy or reasoning with enemies. But while Megatron wants to rule by force, Optimus just eradicates everybody who is not already on is side. 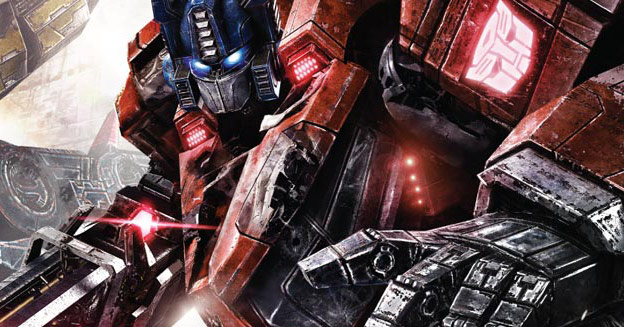 Mercy? He isn’t offering any.

At one point in the second game Optimus explicitly states that he “isn’t offering any mercy”! Optimus is outright gleeful about it. Wisecracking over the next act of killing, using the euphemism “need to be taught a lesson” before ordering a deadly air strike on a whole battalion of Decepticon soldiers. After shredding an enemy’s head to bits he victoriously brags “You shouldn’t have challenged me!”.

The big plot point of Fall of Cybertron is that everybody has to evacuate the planet, since the planet – a huge sentient machine – shuts down to repair itself after being too damaged by the ongoing civil war. For that Optimus had his Autobots build a so called ark and in order to escape they had to refuel with Energon (the omnipotent energy source on Cybertron). So they where taking the last Energon reserves on the planet for themselves, to refuel the ark and subsequently escape, leaving all(!) Decepticons to die on the planet’s surface. The list of Optimus Prime’s almost genocidal views and acts in the game goes on, but I’ll stop here. 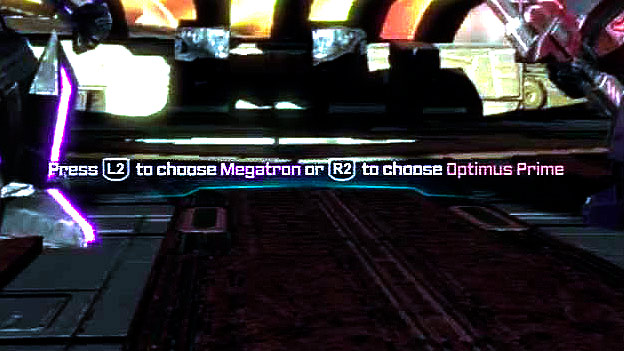 Can the player decide here who wins the war?

Nobody wins in war.

If you as the player somehow still feel like one side is in the right here, High Moon decided to give you one last wake-up call. In the last mission the player is forced to constantly switch between Autobots and Decepticons, further blurring the lines between factions. And in the inevitable final confrontation of Megatron and Optimus, the player is tasked to choose who should win. Switching between factions was mandatory so far, but now the player somewhat is asked to pledge allegiance.

..only to fight for “his team”, complete the sequence and then be treated to the same ending sequence no matter who he has picked.

Yes, the conflict stays unresolved. Both factions still interlocked in battle get sucked through the escape portal wormhole thing at the end. The choice of faction is meaningless, you will just fight and suffer on. No triumph, no satisfaction. The whole game series is just a series of escalating conflicts and subsequently exacerbated losses. 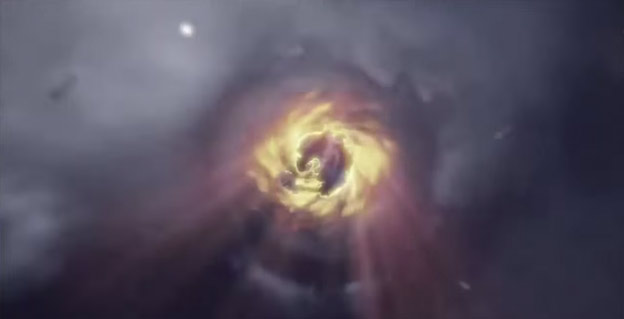 The game ends with both factions on their ships getting pulled through the wormhole, basically flushed out of that solar system and we as the observers stay on this side of the door, seeing them vanish into nothingness.

I know it’s a specific way to read the games and no I don’t know how intentional that was, but High Moon’s Cybertron games successfully deconstructed the normally omnipresent justifications for going to war in war-based action games.

More, it deconstructed the normally default good-vs-evil dichotomy in popular sci-fi and fantasy franchises. Even more, it deconstructed real life war rhetoric by exposing both talkative leaders of the factions for being quite hypocritical in their speeches and managing to make nothing better for anybody.

Let’s hope they don’t fuck that up with their next Transformers game tying this universe together with the Bay-verse. Fingers crossed.

As of now War for Cybertron and especially Fall of Cybertron are really well made, well structured, fun and engaging war-based games with a refreshing lack of self-righteousness.