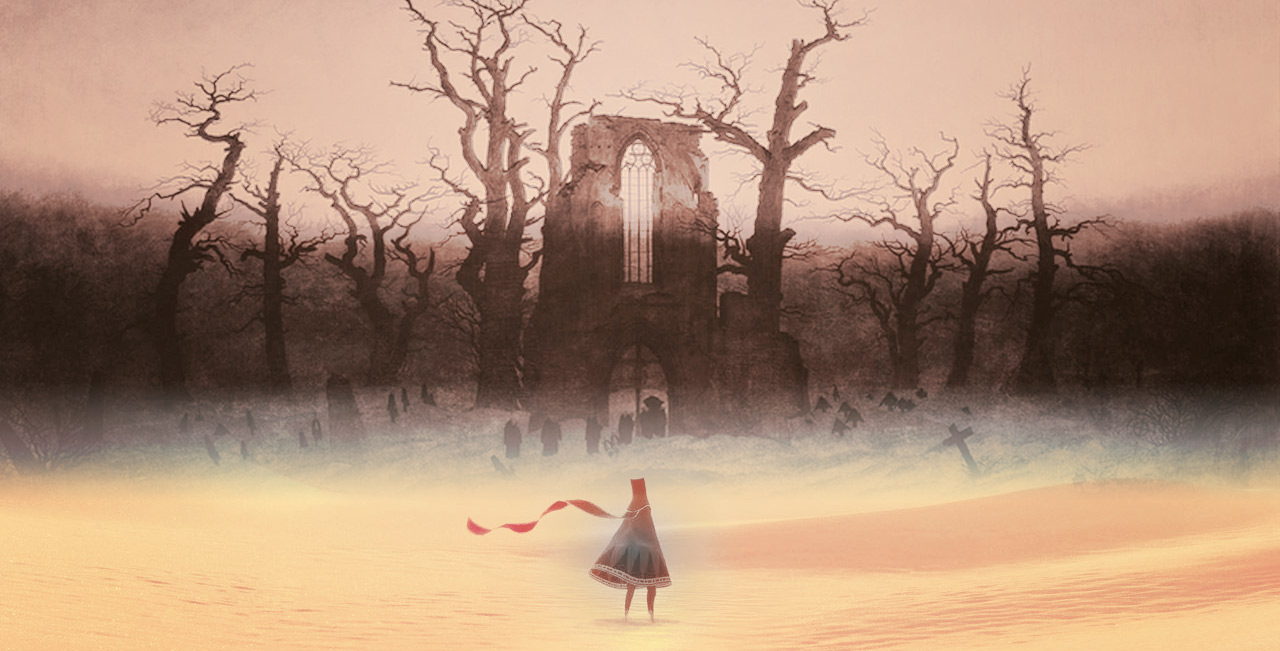 Let’s get introduced to one of the most video-game-defining artist out there… …born in 1774.

The german painter, Caspar David Friedrich is one of many iconic artists of the romanticism movement and responsible for defining many fundamental tropes in early and modern games. His paintings not only gave fodder for game visuals but also laid the groundwork for core concepts of many popular action, adventure and role playing games. 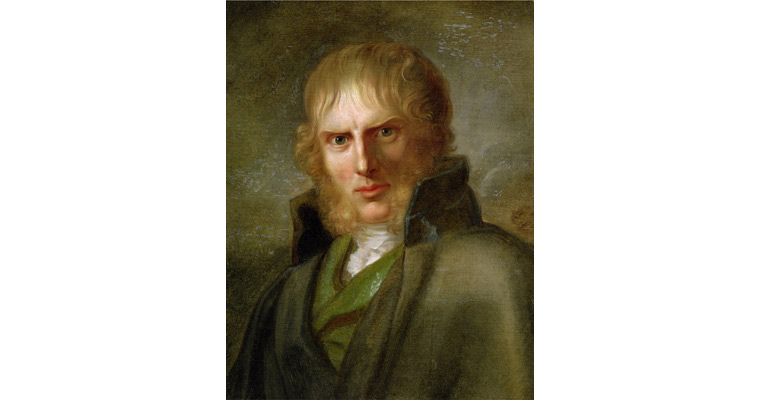 Romanticism is about expressing emotions, rather than conveying information. And Caspar pushed his work to that ideal in an extreme fashion, making his paintings about the feelings they can inspire and the imagination they can spark, rather than about the actual objective content of the image. The paintings are purposely low on detail and lack specific action, to allow you to project whatever you feel onto them.

To generate the emotions listed, Caspar David Friedrich employs a collection of motifs, which reoccur frequently in his works in various combinations.

Stillness is a big thing in his works. Usually nothing of significance happens in his pictures, leaving time to contemplate the past, the future and distant places. Your mind can wander, since there is nothing demanding attention here and now. His use of avatars enhances that feeling of stillness, as they are usually resting, standing or calmly walking, always looking for something in the distance. 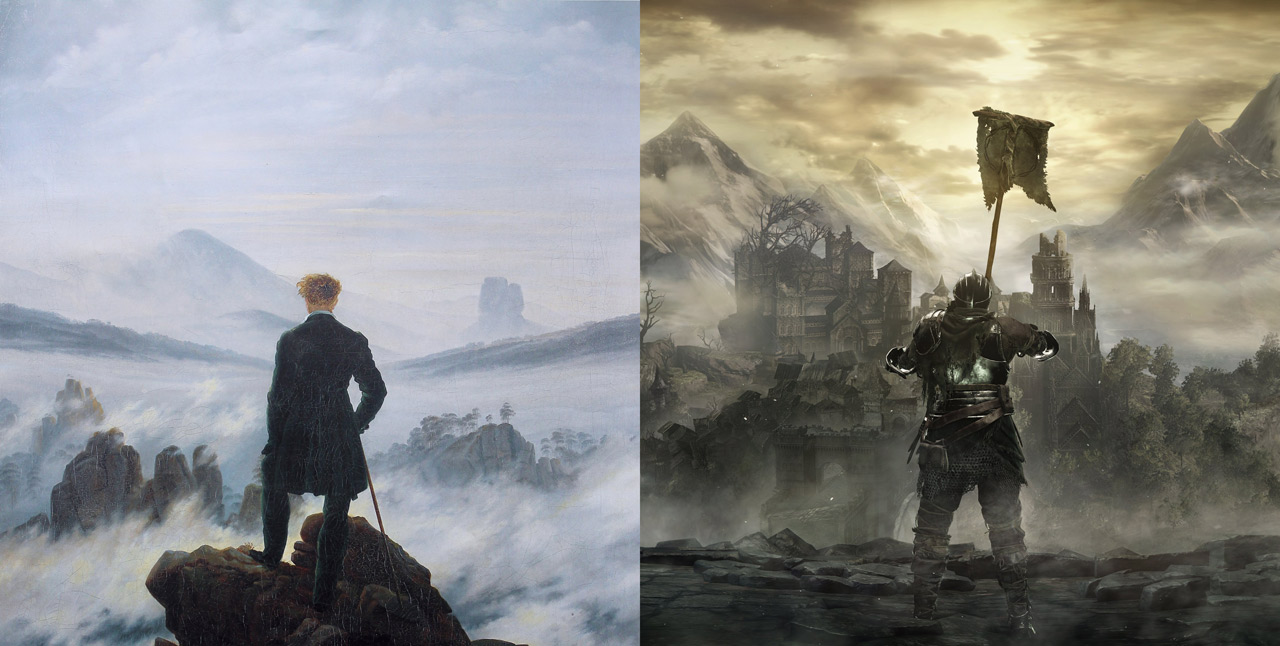 Friedrich’s vast landscapes often feature iconic natural structures, such as giant trees and distinctive rock formations. These structures draw the imagination and so does his use of gothic architecture, often presented as ruins. These structures hint at a forgotten past and pose as significant landmarks for the travels ahead.

He usually places these structures in the distance, bringing the backgrounds of his paintings into the focus, as we are asked to join the respective avatars in their act of gazing into sunsets (or sunrise) and letting our mind wander to places not yet in reach. He also loves to show us paths, gates and doors, making us imagine what lies beyond.

Here are some of Friedrich’s works, I selected as a showcase. Watch out for reoccurring motifs.

Let’s walk through a couple of usecases, where Friedrich’s iconography, layout and motifs are employed in games.

But first, let’s talk genealogy for a second. Saying Friedrich is influential is not the same as saying he was a direct reference for the artists in the respective game project. He sometimes clearly was, though. Even without confirmation from devs, games like Skyrim or Dark Souls owe a huge dept to the painter. 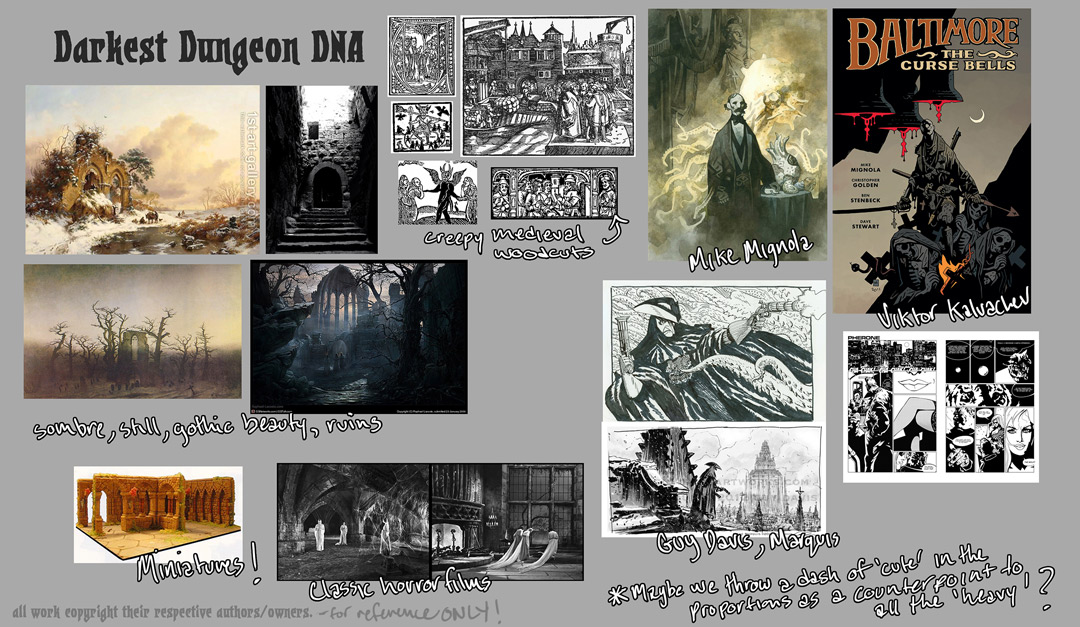 Darkest Dungeon devs directly referencing Friedrich as one of their influences. via

In film and comic, similar feelings of adventure, longing, fear and mystery need to be evoked and Caspar David Friedrich influenced these respective shots and illustrations too, way before video games were a thing. His influence was carried through pop culture in various media and many game artist drew their inspiration directly from those media, instead of drawing it directly from the paintings. 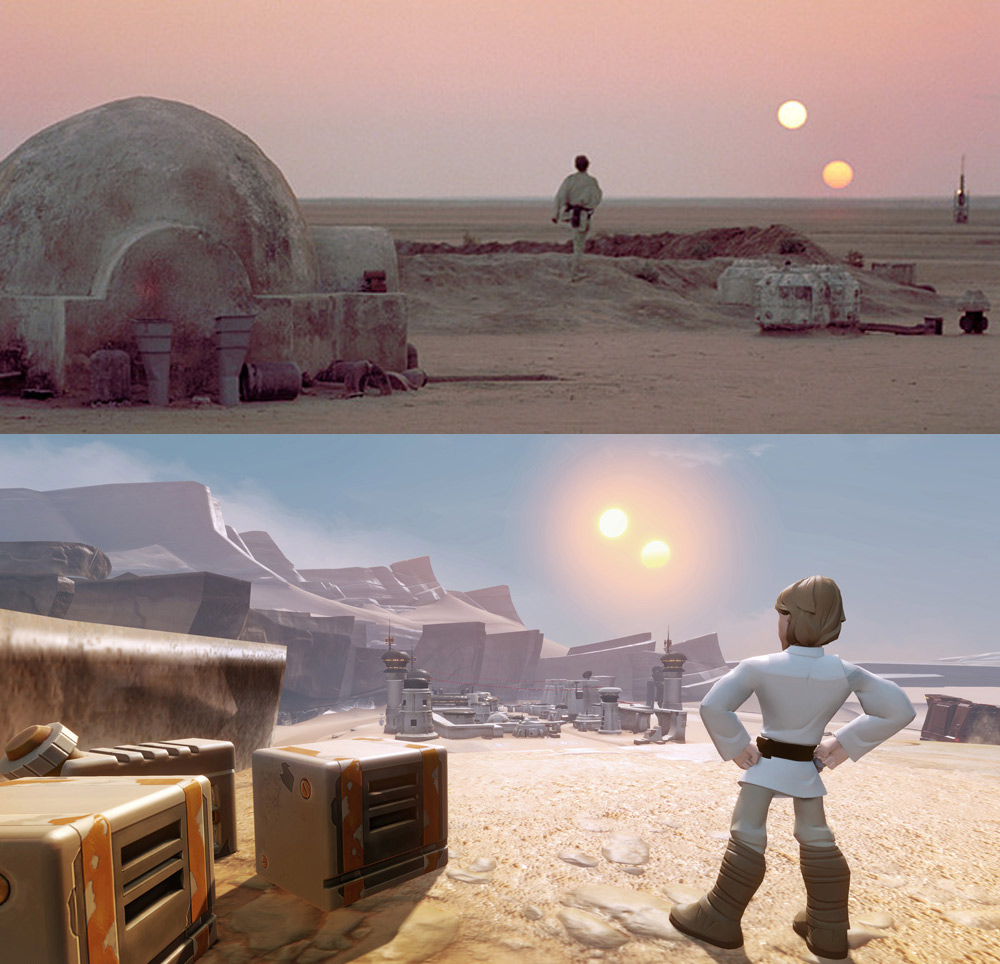 For the effect of Friedrich’s layouts to unfold, it is important that the game designers create moments of stillness.

Games usually thrive on activity if not action. Stillness – moments in which the player stops doing stuff with the controller and rather let’s their mind contemplate the game ahead or the game so far – need to be embedded on purpose. This is frequently done via cutscenes, menus and loading screens, and if the level designers are smart, they carefully guide the player to the necessary platforms to take in the vistas organically during gameplay.

Another popular canvas for those shots is marketing art and trailers. Since these media aren’t interactive to begin with, nobody has to make the player stop pushing buttons for a sec.

Playground – In the genre of open world games, getting the player excited to explore and play with the provided spaces is key. This is why shots of heroes on high ground gazing upon the cities, lands, areas before them in eager anticipation to get going are so popular in advertising for these games. 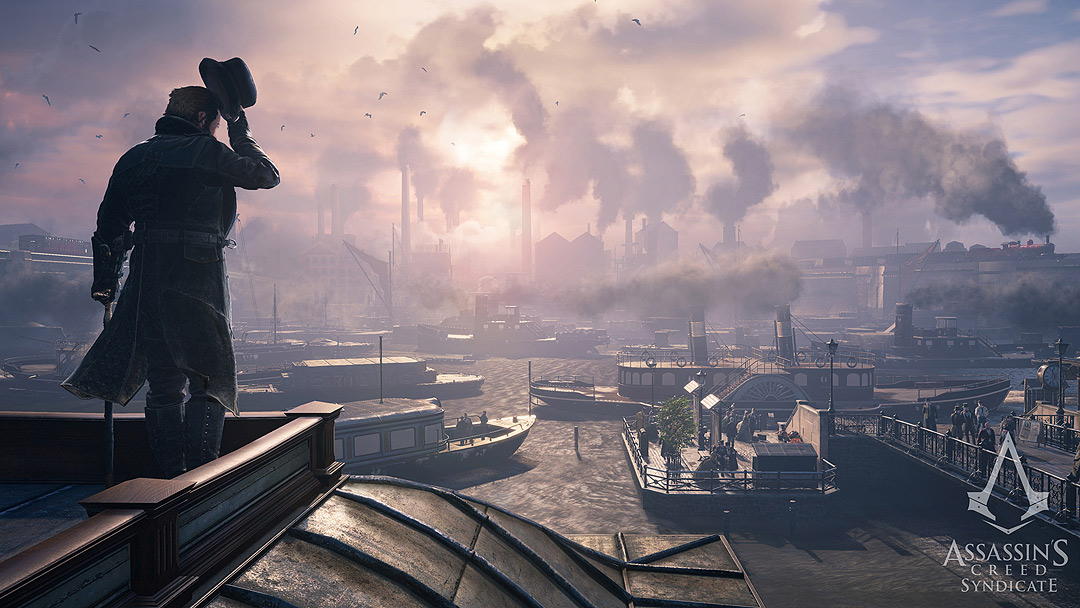 Destiny — Popular in trailers, promo art and intro cut scenes, Friedrich-esk shots of heroes facing their destiny are often used to provide narrative and emotional context for the adventures ahead. A focus on threatening structures – like nasty looking castles – in the distance is frequently used for straight forward adventure games, action games and rogue-likes, games where a specific thread has to be eliminated or conquered. More open landscapes – and a sunrise – are often employed for more open ended games, like MMOs or more optimistic adventures and career games. 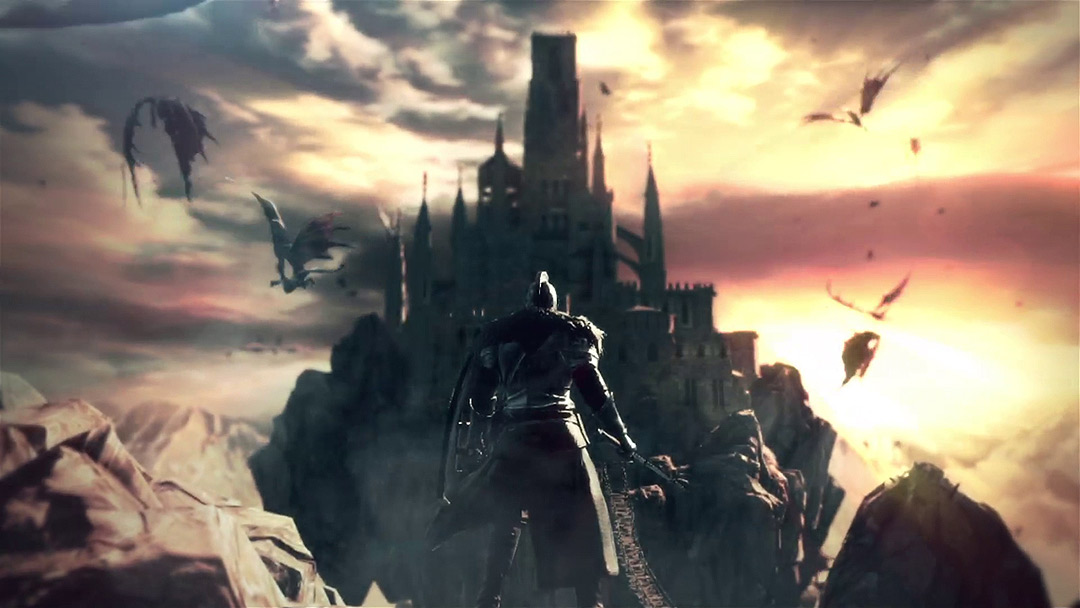 Geography – This method is especially popular in older games, like platformers or arcade action games, where it was not possible to present the player with a seamless world. Sequences of often massively differently themed levels needed connective tissue. It was often done with overworld maps, but also intro cutscenes, which showed a landscape illustration with plenty of spatial depth and the location of last level at the horizon. This spatial contextualization allows players to understand the 2D levels of classic games as a part of a 3D world. 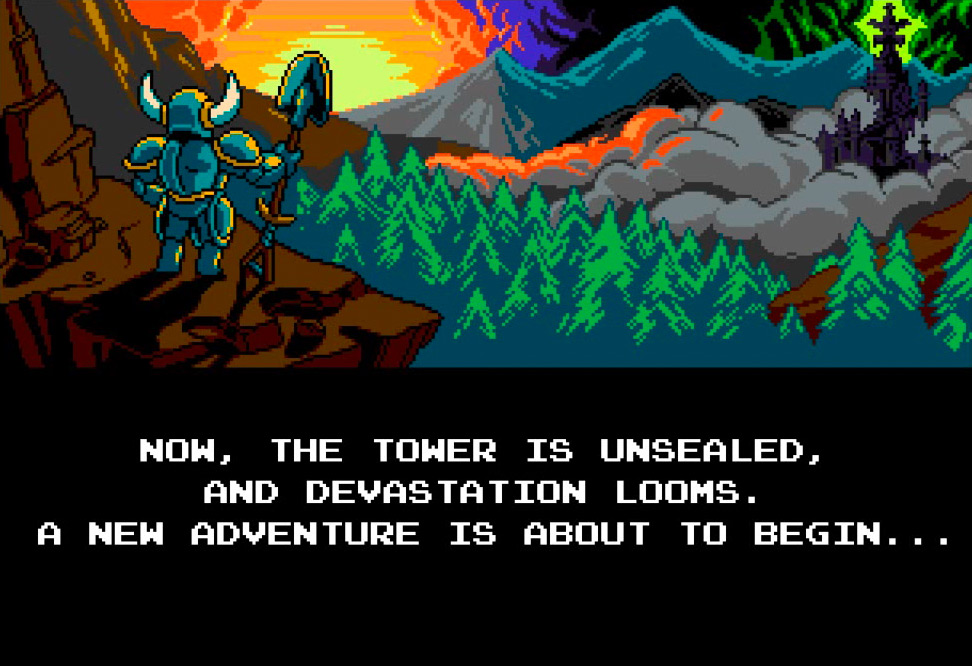 Destination – Friedrich’s approach towards showing enticing structures in the distance is successfully used in games to guide a player towards a certain point in otherwise rather open areas. Important landmarks – places the player feels like they need to check out – can be placed into frame to confirm for the player, that they are on track without resorting to explicit GUI elements or corridors. Also Friedrich’s approach towards paths, gates and doors is frequently mirrored by leveldesigners, who want to guide the player through organic terrain via immediate access points. 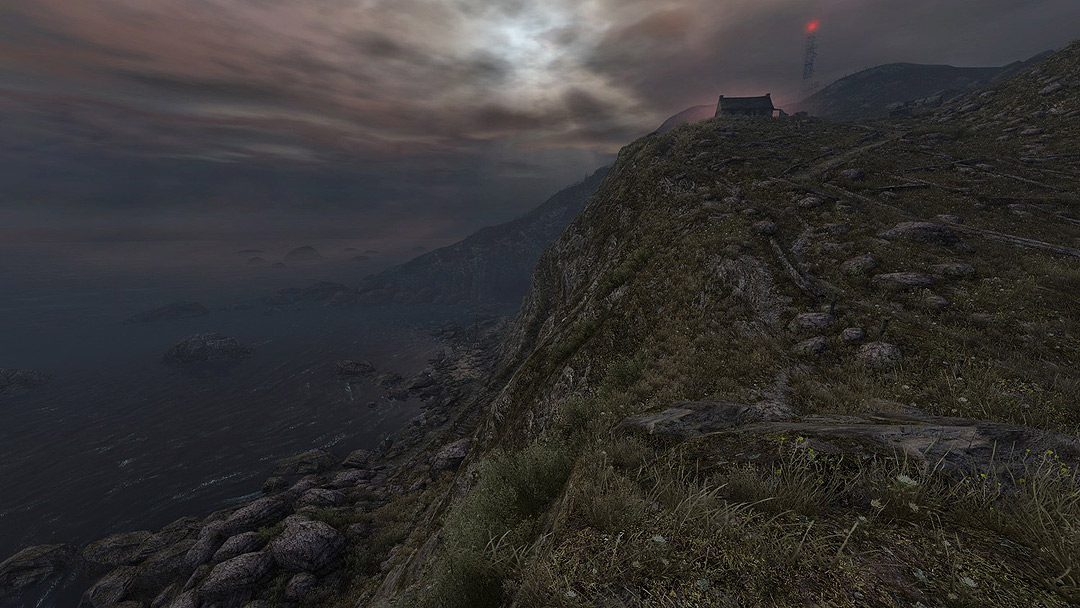 Epicness – Places with a past anchor the player in a universe with an epic history. Mostly popular in high fantasy and sci-fi stories, ruins, wrecks and fallen cities are used to suggest this epic history. The more spectacular the structure must have been in it’s prime and the older that structure, the more epic this universes history is. Setting your game up with those kinds of location and providing the necessary moments of stillness to take them in, suggests that the story we are playing is just a fraction of something much more epic. 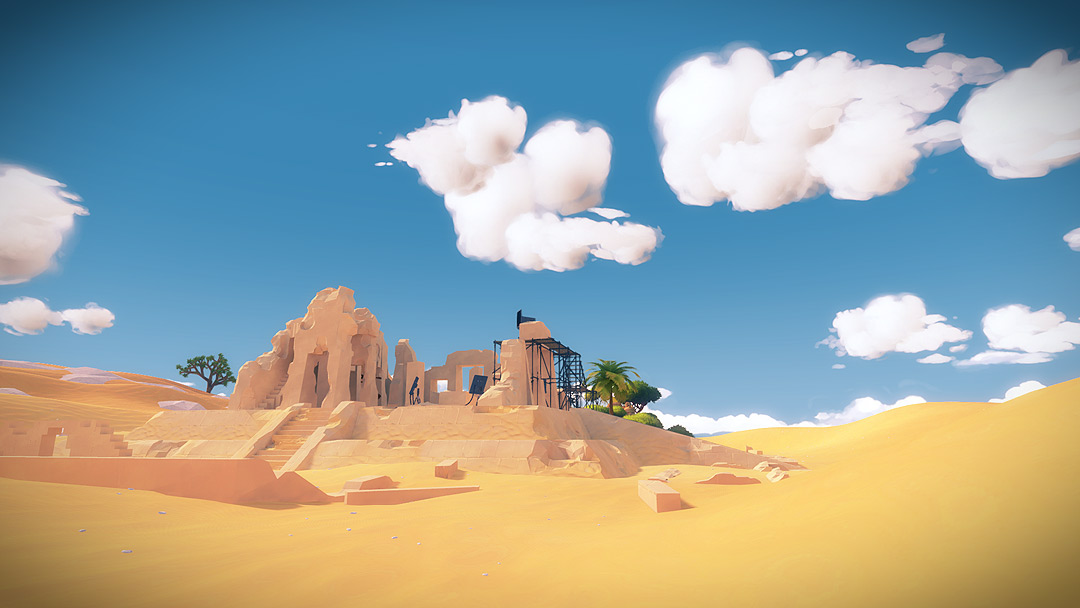 Reflection/Introspection – Commonly used in endings, Friedrich’s romantic shots of us or some avatars calmly gazing into the distance can provide the stillness and time for players to recap what they just played. This is excellent to provide the sensation of calm and relief after a tense final battle or to make a player ponder the consequences of their ingame decisions, if a game allowed for that. Very popular as a backdrop for credit rolls. 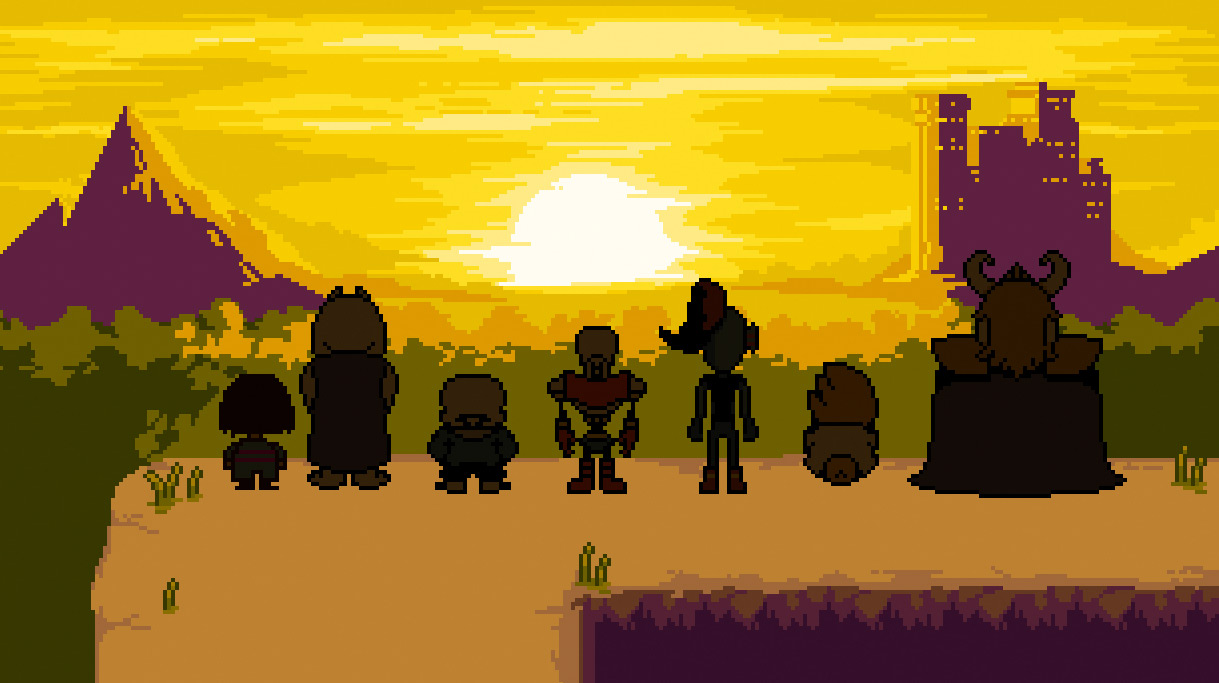 There are more cases. Many I have not yet thought of and many people will invent in the future.

This is how Caspar David Friedrich’s romanticism manifests in games. This gallery contains 8bit to modern games, concept art and promotional images.